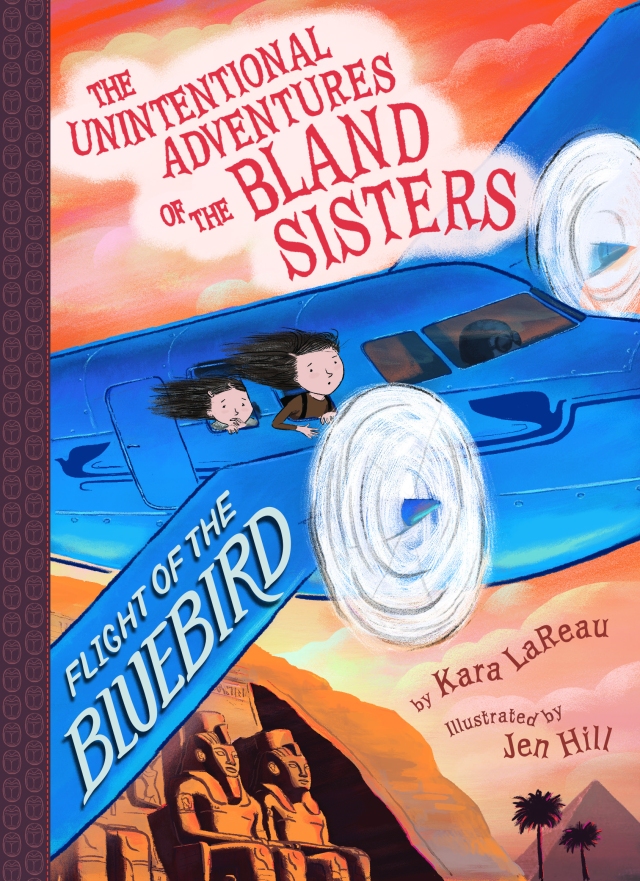 The Unintentional Adventures of the Bland Sisters: Flight of the Bluebird

Fasten your seat belts for some unexpected turbulence ahead, as Jaundice and Kale Bland are back for their final unintentional adventure! Now that they’ve returned from the Uncanny Valley to find their home in Dullsville in absolute shambles, the sisters are rescued by high-flying aviatrix Beatrix Airdale. This time, they’re jetting off (literally) to Egypt to uncover the mysteries of a magical scarab.  By way of Casablanca and after foiling multiple attacks along the way (thanks to Jaundice’s nautical knot-tying skills and Kale’s super-sleuth powers of observation), the Bland Sisters are reunited with their parents. But it turns out that Mom and Dad aren’t as bland—or as “Bland”—as Jaundice and Kale remember. Thanks to their mother’s old archeology notebook, the Bland Sisters uncover their parents’ real identities and help them achieve victory in one final, family-filled adventure. (For ages 8-12)

Louie Ratso tries to help super-cool Chuck Wood win the heart of his friend Fluffy Rabbitski in the third installment of the Infamous Ratsos.

Chuck Wood is the most popular kid in school, and Louie Ratso can’t believe that Chuck has asked him for help! Chuck likes Louie’s friend Fluffy Rabbitski, and he wants Louie to help him get Fluffy to notice him. As for Ralphie Ratso, he can’t believe that his brother wants to spend all his time with Chuck instead of with him. Meanwhile, despite Louie and Chuck’s attempts to get Fluffy’s attention, she has eyes for only one thing: her garden. But there may be hope. As their father, Big Lou, tells his boys, the best way to get someone to like you is to show that you’re interested in what they like. After all, that’s how Big Lou won over Mama Ratso years ago. Can Louie help Chuck find a way into Fluffy’s heart? And will Ralphie find a way to let his brother know how much he misses him? (For ages 5-8) 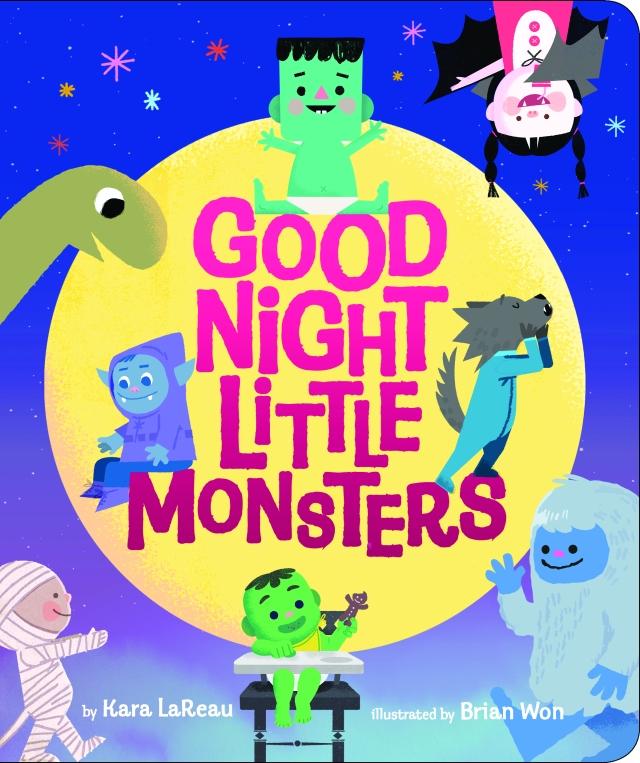 ★”A board book for older toddlers who like pretending to be just a little bit scared. Young children will recognize themselves and their bedtime routines in the four-line rhymes that appear on verso, describing spread by spread eight monsters that they may soon meet in more menacing contexts. What better way to deal with baby monsters than to tuck them safely into bed? Little monsters will try to put off the inevitable bedtime with the demand, ‘read it again.'” —Kirkus Reviews (starred review)

In this padded board book, friendly monster children wind down for the night with predictable bedtime routines. In Won’s warm art, a vampire child with bat wings hangs upside down (“Good night, dear vampire./ Take one final sip./ Please brush your fangs well/ and try not to drip”). Elsewhere, a green zombie baby chomps on a gingerbread man and “gleeful goblins” jump on a bed. A cozy book for little monsters. (Publishers Weekly)

Kids will never see monsters the same way after this heartwarmingly sweet bedtime story that proves little monsters’ bedtime routines aren’t so different from everyone else’s.

Good night, Frankenbaby.
Lay down your green head.
Let’s loosen your bolts and tuck you in bed.
Good night, my Lochnessie.
We’ll swim when we wake.
Now let’s snuggle close in the deep, cool lake.

Great for Halloween, but perfect for all year round, this clever bedtime story has just the right amount of heart, humor, and imagination to send kids to sleep with big smiles on their faces, and comfort knowing that the monsters hiding under their beds aren’t so scary after all. (For ages 0-4)

The Unintentional Adventures of the Bland Sisters: The Uncanny Express

” . . . fans of Dame Agatha’s whodunits will enjoy catching the sly riffs.” (Booklist)
“LaReau has a lot of fun with her Agatha Christie homage, filling her book to the brim with requisite gags and puns . . . Move over, Holmes and Watson. There’s a new detecting pair in town, and the name’s Bland.” (Kirkus Reviews)

Jaundice and Kale are back from their adventure on the high seas, and they are settling back into a quiet life in Dullsville, just the way they like it. The tea is tepid, the oatmeal is tasteless, and the socks are ripe for darning . . . until Aunt Shallot shows up and reveals herself to be anything but the dull relation they were expecting. Instead, she tells her nieces she is Magique, Queen of Magic, and she’s on her way to a big show and in need of two willing assistants. As Magique and the Bland sisters board the Uncanny Express, they meet a cast of mystifying characters. And when Magique goes missing, it’s up to Jaundice and Kale to solve the mystery—with the help of famous detective Hugo Fromage.

An inventive story in the tradition of Agatha Christie’s Murder on the Orient Express, The
Unintentional Adventures of the Bland Sisters: The Uncanny Express has all the whimsy and humor that readers who are looking for an anything-but-bland adventure will love. (For ages 8-12) 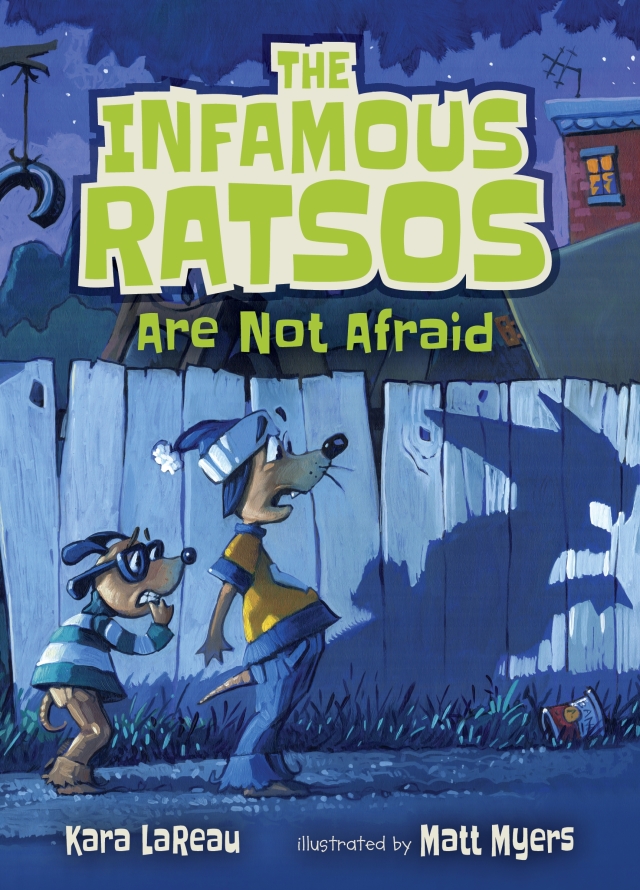 The Infamous Ratsos Are Not Afraid

★”Another tale for fledgling chapter-book readers that highlights the profound value of kindness to others.” (Booklist, starred review)

“Readers will be following right alongside these two likable rats as Ralphie confronts his past misdeeds and Louie screws his courage to the sticking post….Charming.” (Kirkus)

Louie and Ralphie Ratso have a genius idea: if they clear out the lot down the street, they can use all the junk lying around to build makeshift games for a Big City FunTime Arcade! With their friends to help, they’ll be able to recycle all the old abandoned stuff into whack-a-mouse, a high-striker, a fortune-telling booth, and more. Everyone says the house next to the lot is haunted, but if Louie just pretends it’s not there, maybe he can ignore the goose bumps he gets every time he looks at it. Ralphie’s head’s not exactly in the game, either, because of some rumors that have been swirling around school. But they’re Ratsos, and like their dad, Big Lou, Ratsos aren’t afraid of anything — right? Kara LaReau and Matt Myers team up for a second surprisingly touching chapter book proving that sometimes the things you fear the most aren’t at all what you thought — and might be exactly what you need to feel better. (For ages 5-8)

The Unintentional Adventures of the Bland Sisters: The Jolly Regina

An Indie Next Winter 2017 Pick

“With dry humor and a touch of snark, this first book of a new series is a smart choice for readers who have mastered Bink & Gollie but aren’t quite ready for Lemony Snicket. (School Library Connection)

“Plenty of references to booty and poop decks make for easy humor, while more subtle comedy comes from the deadpan third-person narration.” (Bulletin of the Center for Children’s Books)

In the spirit of A Series of Unfortunate Events and the Incorrigible Children of Ashton Place series, The Unintentional Adventures of the Bland Sisters will captivate middle-grade readers looking for humor, hijinks, and a swashbuckling good time. Meet Jaundice and Kale Bland, two sisters who avoid excitement at any cost. Together, they patiently await the return of their parents, who left on an errand years ago and have never returned.

One day, the Bland sisters are kidnapped by an all-female band of pirates. They’re unwillingly swept into a high-seas romp that might just lead to solving the mystery of what happened to their parents. With whimsical illustrations and Roald Dahl–esque wit, The Unintentional Adventures of the Bland Sisters is the visually stunning, laugh-out-loud funny start to a new series for readers who are looking for an anything-but-bland adventure. (For ages 8-12)

An Amazon Best Book of the Year

★”Louie and Ralphie Ratso are determined to be as tough as their truck-driver father, but the rats’ efforts go hilariously awry in this funny, thoughtful, and smart chapter book…LaReau packs substantial comedy and poignant emotion into each chapter (the boys’ mother has “been gone for a little while now”), adeptly amplified by Myers’s spot art.” —Publishers Weekly (starred review)

“LaReau keeps the action high and completely appropriate for readers embarking on chapter books…The humor springs from their foiled efforts and their reactions to their failures. Myers’ sprightly grayscale drawings capture action and characters and add humorous details, such as the Ratsos’ ‘unwelcome’ mat. A nicely inventive little morality ‘tail’ for newly independent readers.” —Kirkus Reviews

“The father-son dynamic is realistic and honest. Young readers will feel for the family as they learn to deal with the absence of a loved one. This slender novel packs a strong message of overcoming loss through love and kindness. A solid purchase; a chapter book that entertains and uplifts.” —School Library Journal

“Generous black-and-white illustrations evoke setting (a rundown city neighborhood) as well as reinforce the storyline and the light tone of the text, with its natural vocabulary. Here’s a beginning chapter book with heart.” —Horn Book

Louie and Ralphie Ratso’s dad, Big Lou, always says that there are two kinds of people: those who are tough and those who are soft. Louie and Ralphie are tough, tough, tough, just like Big Lou, and they’re going to prove it. But every time they try to show just how tough they are, the Ratso brothers end up accidentally doing good deeds instead. What’ll Big Lou do when he finds out they’ve been acting like softies all over the Big City? Perfect for emerging and reluctant readers, this clever and surprisingly warmhearted chapter book shows that being tough all the time can be really tough. (For ages 5-8)

A few words from me regarding the Geisel Honor!

Ugly Fish is ugly and big and mean, and he won’t share his driftwood tunnel or his special briny flakes with anyone. And that means the wimpy little fish who keep showing up in his tank have got to go. But then one day someone bigger and uglier and maybe even meaner arrives . . . and suddenly Ugly Fish isn’t feeling quite so confident anymore. (For ages 4-7)

Until tomorrow
The heart wants what it wants
YOU are doing an amazing job. ❤️
Aaaand I may have also made chocolate chocolate chip banana bread 🍫🍌 #quarantinebaking
I don’t know about you, but my anxiety has been OFF THE CHAIN these days. I spent this afternoon chilling out and cooking, thanks to deliveries this week from @abmonroedairy and @marketmobileri / @farmfreshri. We started dinner tonight with a flatbread topped with caramelized onion-garlic jam, mandoline-sliced sweet potatoes from @schartnerfarms in Exeter, Crescendo (Stracchino di Crescenza) cheese from @richeeses, and baby kale from @babygreensfarm in North Kingstown. Followed up with chicken sausage, asparagus, and sweet potato soup. Our 6yo oped for pizza bagels (bagels care of @rebelleartisanbagels). Not pictured: ice cream from @blissdairy for dessert. Feeling calmer, grateful, and very glad to support our local food community during these uncertain times. ❤️😋 #quarantinecooking
Just had a very productive ﻿(and hand-sanitizer-fueled!) signing session at @books_on_the_square, my local indie. Order or preorder my books from them and I’ll sign them for you, too! (Just indicate how you want them signed in the Order Comments.) 📚📚📚 #kidlit #childrensbooks #picturebooks #chapterbooks #middlegrade #books #teachers #parents #librarians #reading #book #authorsofinstagram #writersofinstagram #readersofinstagram #teachersofinstagram #bookgeek #booknerd #bookworm #kidslit #author #childrensbook