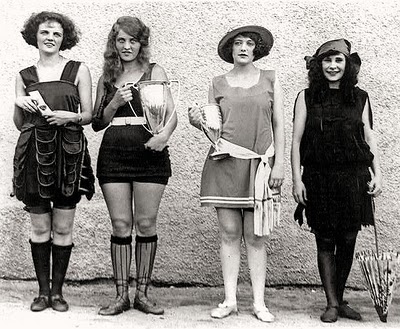 In the spring of each year, my high school held an Awards Night, where academic prizes were bestowed, and newly-elected student, class, and athletic council members were sworn in. Only the students who were receiving these honors (and their parents) were invited. It was kind of a big deal, especially if you were winning an academic prize, because those weren’t announced beforehand, so it was a surprise to see who won what.

At the end of my sophomore year, I received an invitation to Awards Night. And I’d just lost a heated election for Junior Class Council Vice-President, so I knew I wasn’t going to be sworn in for anything. That could only mean one thing — I was going to win an academic prize.

As you might imagine, my parents were thrilled. I was thrilled, too, and a little shocked — academic prizes were reserved for the creme de la creme of the student body, and while I was smart, I can’t say I always applied myself. But maybe I’d just been selling myself short, I thought. Clearly, someone had finally recognized my unassuming genius. No doubt it was going to be an English prize; that had always been my best subject (only because forging signatures to get out of gym class was not yet officially sanctioned by the Board of Ed).

On the evening of Awards Night, my family and I got all dressed up and headed over to the high school auditorium. My parents and sister sat in the audience, while I sat up on the stage with the rest of the invited students. I felt proud to find myself among these smart, driven, popular kids. They were clearly winners. And now, I was one, too.

I don’t remember exactly when I realized something was wrong. It was probably after the English prizes were awarded, and my name wasn’t called. I KNEW my name wouldn’t be called for math, or science, or foreign languages, or history. And as I hadn’t attended gym class all year, I knew I wouldn’t be recognized for athletics. One after the other, the awards were announced, and the students around me went to claim their prizes, as their families clapped and cheered. And then the officers of the various councils were sworn in, which meant the evening was over.

Don’t ask me to tell you what it was like to face my parents afterwards, because I’ve clearly buried the shame and humiliation pretty deep. But I do remember being approached the next day at school by Ms. Eyerman, who ran the Awards Night, and apologized to me for the mistake. Evidently my name had been added to the list of invitees accidentally, and for that, she was deeply sorry. Did it make me feel better, to know I’d accidentally and regretfully been labeled a winner? It did not.

But it did make me feel something else.

One year later, it was Awards Night again, and I was sitting up on the stage, looking out at my parents in the audience. Only this time, it wasn’t a mistake. I was there for real, being sworn in as Student Council President. I’d spent the whole year planning and plotting, carefully assembling my council slate, devising a campaign slogan, creating posters and radio commercials and speeches. And all that concerted effort paid off.

This might seem like a sappy After School Special ending to the story, only it’s not the end. Since that victory, I’ve gone on to experience a lifetime filled with many moments of defeat and disappointment, moments that made me feel like even more of a loser than I did on that first Awards Night. Not getting into ANY of the MFA programs I applied to the first time? Check. Having to move back in with my parents after college? Check. Having a boyfriend break up with me ON my 21st birthday? Check. Being laid off? Check. Bad reviews? Check. Numerous rejections of my work? Check, check, check, check…

But something happened to me after that first, fated Awards Night; it’s as if my exposure to that level of radioactive disappointment altered me chemically, and infused me with extraordinary resilience and determination. It made me, in effect, a super loser.

Now, when disasters strike in my life, I am momentarily sullen, like anyone else. But then, I spring into action. I get back to work, and I work TWICE as hard. Usually, the extra effort pays off. But if not, I just pick myself up, dust off my super loser costume (which features lots of padding for my many falls, a crash helmet, and a utility belt with Band Aids for my bruised ego) and try again.

For those involved in yesterday’s DearReader.com contest, the “winner” is Brooke Anna Roberts of Purdon, TX. Congratulations! And many thanks to all who entered — you’re all winners in my book! (More contest winners to be announced tomorrow…)

Many thanks to those who came out for my storytelling session at the Providence Arts Festival — and a big thanks to author-illustrator Alison Paul for organizing the event. I walked into the ROOTS cafe to find my very own personalized signing station:

During my performance, I read from OTTO, Ugly Fish, and Rabbit & Squirrel. As an encore, I gave the audience a sneak peek at my upcoming picture book, about a certain aloof porcupine. Here’s the lone photo captured of me in action: 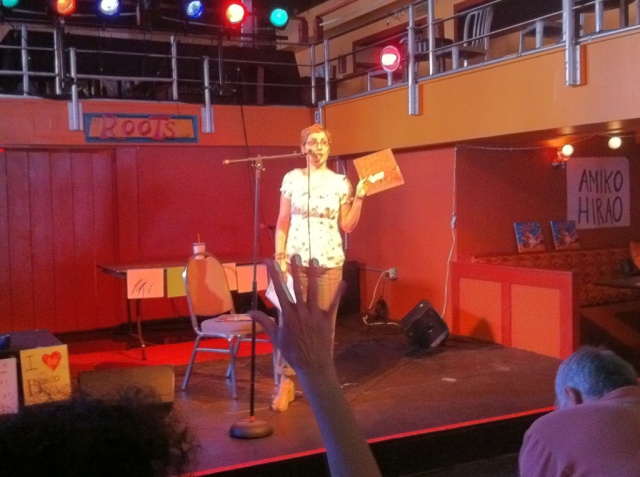 I was thrilled to meet some new friends, including author-illustrator Amy Walrod, and illustrators Amiko Hirao and Jen Corace. A few old friends showed up, too, and even my cousin and her friend made the trip. We celebrated afterwards with sangria and sunshine, sitting outside a bistro on Westminster Street amidst the Festival comings and goings.

And then, yesterday, my husband and I woke up and watched some of the 9/11 remembrance footage. As the bell was rung for each moment of silence, I was transported to where I was when it all happened: first, at my desk at Candlewick, hearing about it in an email from a friend, a message I had to reread several times before I fully understood it. Then, in my car on the way home, after we were all dismissed from work by our tearful bosses, the radio announcer stating that the first Tower had fallen. And then, at home, the first of many drinks in my hand, eyes glued to the television, as the rest became all too clear.

I spent the remainder of yesterday morning weeding, which seemed like an appropriate, grounding (literally and figuratively) thing to do. And then, I attended the opening of Scott Magoon’s art show at the Danforth Museum in Framingham. It seemed right to surround myself with evocative art, and end my day in creative reflection.

If you can get yourself to see it, you MUST go and check out Scott’s installation, which features pieces from all of his books, including those we’ve made together. Here is a photo of moi having a moment next to a particularly restful piece from OTTO:

And here I am next to one of my very favorites, from our upcoming picture book, Mr. Prickles!

Afterwards, the good people at the Danforth asked me if I would sign some stock — and Mr. Magoon generously allowed me to horn in on his signing. What a guy.

All in all, a pretty darn good weekend.

In the spirit of the holiday, unearthed this lovely gift from a long-ago suitor. It’s actually a UK edition, and look at that gorgeous case and color plates. While some relationships don’t last, authentic gestures endure. ❤️
Big love to my two boos ❤️❤️
‪Some of the best humor can be found on bathroom walls. #facts ‬
About to tuck in to some soosh 🍣
Gettin’ my bacon n cheese li’l smokies on #superbowl 🥓🧀🏈
My glamorous writing space, i.e. random table near coffee bar in company lobby