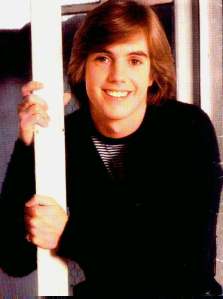 My exhibition of childhood crushes continues…

Shaun Cassidy was the first boy for whom I really went gaga. And why wouldn’t I? He could sing (at least, to my seven-year-old ears), he could act, and he seemed way cooler and funnier than his brother on The Hardy Boys, Parker Stevenson. Plus, LOOK at him. I couldn’t get my own hair to feather so perfectly.

Shaun also introduced me to a life of crime, as I tore a centerfold poster of him out of an issue of Tiger Beat from our local Stop & Shop, and hung it on my bedroom wall. Clearly, I would have done anything for him. I even made a complete fool of myself with my friend Danielle, as we listened to my Shaun Cassidy records (Shaun Cassidy and Born Late) while singing into microphones my (ever-encouraging) mother made for us out of golfballs screwed into dowels, spray-painted gold. I didn’t even think his half-brother David was particularly attractive. Next to Shaun, he may as well have been Danny Bonaduce.

According to my Official Shaun Cassidy Scrapbook (aka my then-Bible), Shaun was born in 1958, which meant he was thirteen years older than me. That was okay. I planned to bide my time, until I was eighteen or nineteen and the age difference wouldn’t matter as much — and be, you know, legal. Unfortunately, Shaun wasn’t willing to be quite so patient; he broke my heart (along with millions of other girls, I’m sure) when he got married in 1979.

I can’t hate Shaun for treading on my dreams; after all, he did transcend his teen idol status by becoming an amazing producer and writer. And he wasn’t half-bad when I saw him on stage in Blood Brothers with David Cassidy, back in the early 1990s. I may not still carry a torch for Shaun, but I’m impressed that he turned out to be more than just a pretty face. It’s one of a handful of times I exhibited good romantic instincts.

Next time…I reveal my crush on someone who lacked, er, dimension.

Two reminders: A contest for teachers and librarians! And a contest for everyone! (And not to give anything away, but at this point, if you enter, you have a REALLY good chance of winning. Ahem.)

One thought on “Shaun.”