Hello, friends, and welcome to the first day of the INFAMOUS RATSOS Kindness Contest!

As previously mentioned, feel free to share how you’ve been nice or thoughtful or generous or helpful (or all of the above!) in the comments section here. I’ll choose a name at random at the end of the day; the winner will get a signed book, a bookmark, and some INFAMOUS RATSOS “Hang Tough” tattoos (aka “rattoos”). Of course, you’re all winners just for playing (and being awesome), but even if you don’t snag a signed book, you might just be eligible for some nifty Ratsos swag (more on this later). The winner will be announced tomorrow morning. NB: One post per entrant per day, please!

So, I promised I’d tell you about some of the experiences and people that inspired me to write THE INFAMOUS RATSOS. I’ll start with the Ratsos’ neighbors, Mrs. Porcupini and Mr. O’Hare. When I was growing up, we had a neighbor who lived across the street named Mrs. Dowling. Her husband passed away shortly after we moved in, so she lived by herself with her cat, Alice Peterson (who was a male cat, and was evidently named after an old-time actor, though I can’t seem to find any info about him anywhere). Alice Peterson was always getting into fights with other cats in the neighborhood, so he always looked beat-up and bloody.

Mrs. Dowling was a very sweet old lady, but she was also terribly nosy. I’m sure this was because she was also terribly lonely. After her husband passed away, she got into the habit of sitting at her picture window and just staring at our house All. Day. Long. Often, she’d remark to my mother about the number of cars parked in and near our driveway, or even how affectionate my mom and dad were (evidently, she could see them kissing goodbye in our living room before my dad went to work every morning). Sometimes, her observations were not quite as innocent — once, I was sitting on my front stoop waiting for a high school friend to pick me up, and she called 911 and told them a “strange man” was lurking outside our house! As Mrs. Dowling got older, and her senses grew less keen, my mother would stop by regularly and do odd jobs for her. When I came up with the character of Mrs. Porcupini, I remembered Mrs. Dowling staring out of that picture window. Matt Myers added those hilarious curlers in his rendering of her for the book; I never told him, but Mrs. Dowling also wore curlers sometimes! 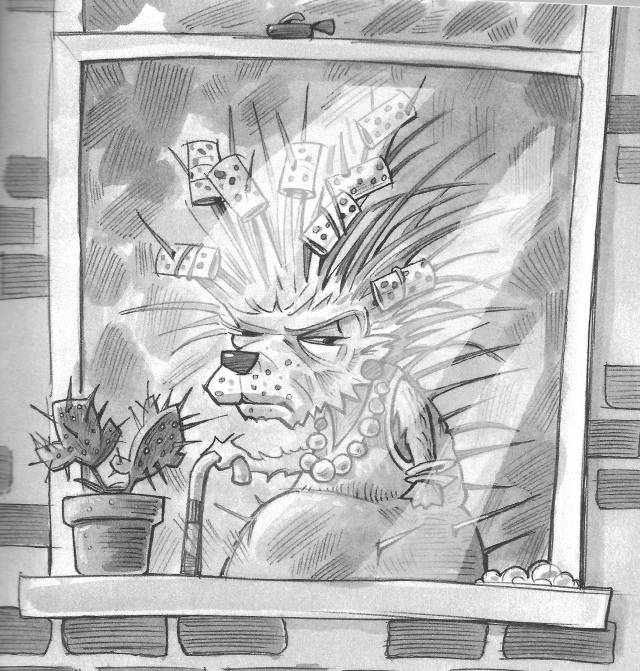 Now that we are also homeowners, my husband and I do whatever we can to be good neighbors. In the winters, my husband doesn’t just snowblow our own (painfully long!) driveway — while he’s out there, he makes sure to take care of other neighbors’ driveways as well. When we take our son out for trick-or-treating, I always make sure we have bags of homemade cookies to give our neighbors in return for their Halloween hospitality. At the holidays, we go door-to-door with gifts of gingerbread, and this past year we welcomed our neighbors to a New Year’s Day open house brunch. We also have everyone’s emails and phone numbers, so we’re happy to know when our neighbors are out of town, so we can pull in their garbage cans on trash day or keep an eye on their houses in general. It’s really nice to feel like we’re part of a caring community on our little street.

We’re lucky our street is within walking distance to a quaint and quirky district of stores and restaurants in our neighborhood. We’ve made sure to learn all the names of the shopkeepers, and we patronize their stores and eateries as often as we can. When I came up with the character of Mr. O’Hare, I thought about the friendly proprietors in our own neighborhood — I love the signage Matt put in Mr. O’Hare’s store in the book, especially the welcoming “HOP IN WE’RE OPEN” sign! 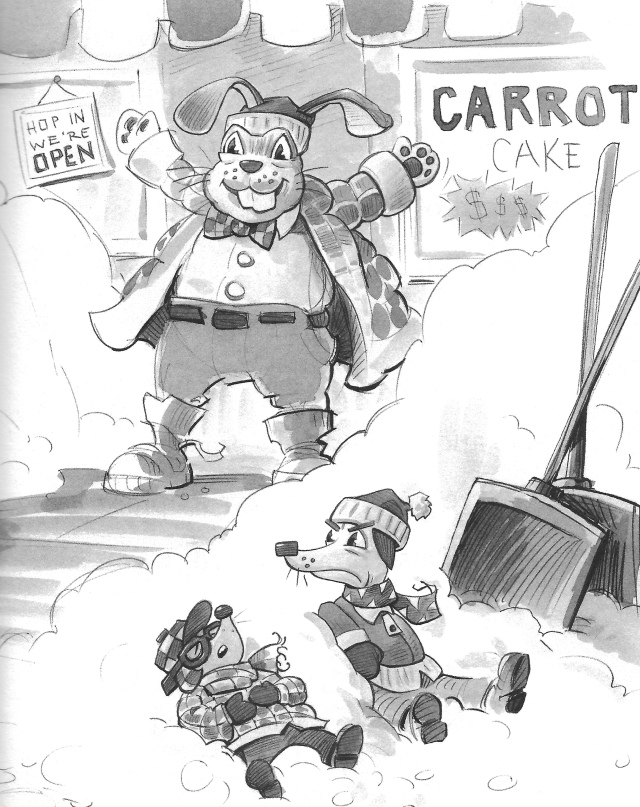 In the days to come, look forward to more stories about the people and things that inspired me as I wrote THE INFAMOUS RATSOS. In the meantime, hope you’ll enter my Kindness Contest — and spread the word about it to others!