Hello, friends, and welcome to the third day of the INFAMOUS RATSOS Kindness Contest!

Unfortunately, we don’t have a winner for yesterday, since no one submitted an entry. (WHAT?) Does no one like free signed books and fun swag? Well, good news for those who enter today: I will be picking TWO winners this time!

As previously mentioned, feel free to share how you’ve been nice or thoughtful or generous or helpful (or all of the above!) in the comments section here. I’ll choose two names at random at the end of the day; the winner will get a signed book, a bookmark, and some INFAMOUS RATSOS “Hang Tough” tattoos (aka “rattoos”). Of course, you’re all winners just for playing (and being awesome), but even if you don’t snag a signed book, you’ll be eligible for some nifty Ratsos swag (more on this later). Today’s winners will be announced on Monday. NB: One post per entrant per day, please!

So, I’ve been telling you about some of the experiences and people that inspired me to write THE INFAMOUS RATSOS. Over the past couple of days, I ‘ve told you all about the people who inspired Mrs. Porcupini and Mr. O’Hare and Miss Beavers. Today, I thought I’d talk about my inspiration for Louie and Ralphie’s classmates: Tiny Crawley, Chad Badgerton, and Fluffy Rabbitski.

I was always kind of a weird, funny, smartypants kid, so it’s no surprise that I’ve always had weird, funny, smartypants friends. (Also, most of my friends back then were boys, since they seemed to be the only ones who could tolerate my singular brand of gross-out humor.) Yesterday, I talked about a kid named Rob, who (temporarily) sat next to me in third grade. Eventually, Rob and I became best friends. We’re still friends today; we were both in each other’s weddings — he actually officiated at mine! — and our kids now play together. I think his son and daughter are about Louie and Ralphie’s ages at this point!

On my wedding day, with Rob (top left) as my officiant, and my other BFF, Jeff (lower left), as one of my attendants. (Jeff was also in Ms. Willis’ class, in the photo I posted yesterday in the top row on the left. Sadly, he passed away three years ago.) My grandfather is also pictured here — he was our ringbearer! More on him later.

When I thought about Louie and Ralphie’s friends, I imagined they would be a weird, funny group, too. I wanted them to look funny together, which is why Tiny is so small and Chad is so big. (FYI, Chad seems like a bully in this first book, but he redeems himself later on.) 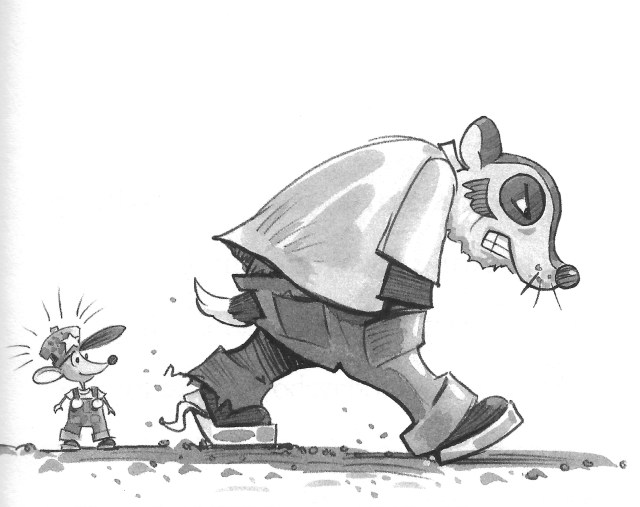 For now, Fluffy is the only girl in the group, just like I was. Louie and Ralphie think they’re going to gross her out with their pickled vegetable sandwich, but it turns out she loves it, just as I would have. I should also mention that my grandfather used to pickle his own vegetables, so we’d always have a jar or two in the refrigerator. I still love that briny, vinegary flavor to this day; I know it can be an acquired taste, which is why I thought it would be fun to attribute it to someone as seemingly-ordinary as Fluffy.

Of course, I love the way Matt Myers has portrayed Tiny and Chad and Fluffy. I especially love Fluffy’s glasses; they look a lot like mine!

Next week, look forward to more stories about the people and things that inspired me as I wrote THE INFAMOUS RATSOS. In the meantime, hope you’ll enter my Kindness Contest — and spread the word about it to others!